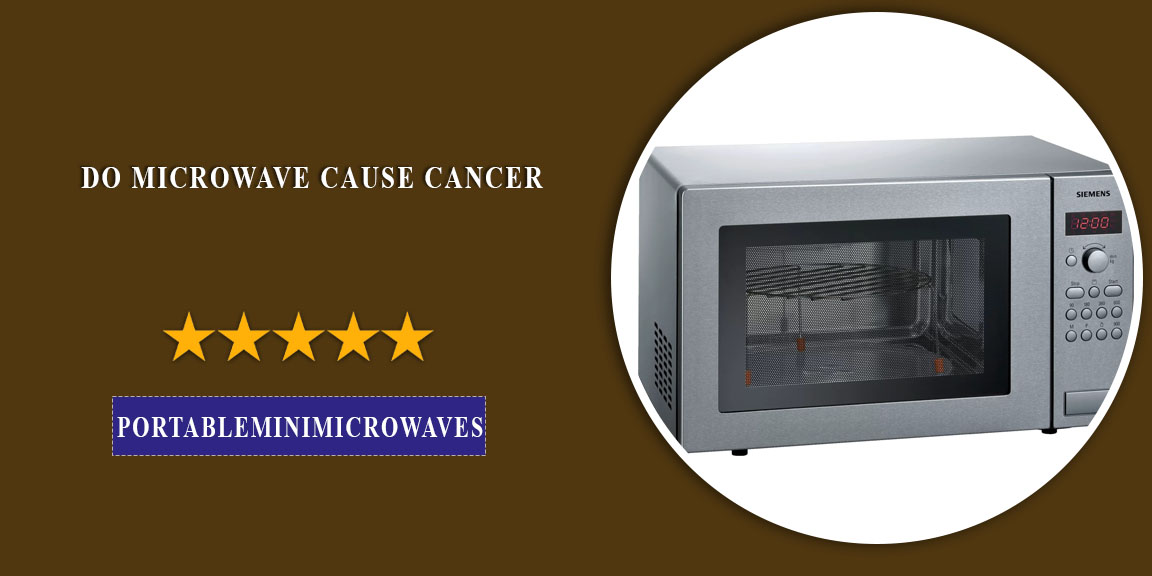 To better understand microwave ovens, microwaves, and their impacts on health, you need to read this article carefully to the end.

How Does a Microwave Cook or Heat the Food?

Now, this is an essential aspect to our question, Do microwaves cause cancer? Because one needs to understand how an electronic appliance used at houses and restaurants all over the globe takes part in causing cancer.

So actually this question arises due to its means of heating or cooking food items.

Microwave ovens release microwaves which are a kind of electromagnetic radiation inside the vicinity. These rays range from One meter to One millimeter, with frequencies between 300 MHz and 300 GHz, respectively. These radiations fall in safe range so they are not harmful to a higher degree.

Our Electrical power supply lines, cell phones, microwave ovens, Wi-Fi, computers, and many other appliances work by sending out streams of invisible energy waves. As a result, electrical and magnetic fields are formed around every place where electricity is used.

Now many researchers believe that most of the EMRs are not dangerous, while some still question the safety of EMRs. While many also say that there is yet to be enough research done to calculate the level of danger and protection regarding EMRs.

There are two types of EMFs one usually gets exposed to

This one is the ionizing type of radiation. Scientific research shows that exposure to such ionizing variety can cause damage to human DNA or tissues.

This one is the non ionizing type of radiation. Scientific studies and research have suggested that exposure to these kinds of radiation is harmless to human health, body organs, and tissues because they are mild in their effects. Household appliances like hairdryers, mobile phones, microwaves, ovens, washing machines, power lines, etc. Produces this kind of radiation.

Research on Harmfulness of Electromagnetic Radiations:

There is still a disagreement in the scientific literature over the EMRs that whether EMRs pose a danger to human health or not, and if so, then how much?

The International Agency For Research on Cancer(IARC) has classified non-

Ionizing EMRs in the radiofrequency range as a possible human carcinogen. These radiations are produced by Electronic products like smart devices, mobile phones, and microwaves.

IARC operates under the World Health Organization (WHO). It has convened working groups of scientists from around the globe to evaluate the cancerous risks on humans from the environment and lifestyle factors.

The currently available IARC evaluation from 2011 pointed to a possible link between Radio Frequency radiation and cancer in humans, particularly a malignant type of brain cancer.

So the conclusion is that there are potential risks. But again, these possible risks will rise when you are exposed to a high density and quantity of radiation which does not come out of a microwave oven. Thus, you need not to worry.

Effects of Microwaves on Human Health?

Microwaves radiation can cause the same heating effect on human tissues as it has on food. In addition, organisms absorb Electromagnetic radiation, which can lead to some psychological and functional changes.

Many processes are usually going on in our Central Nervous System, including learning and memory storage, taking responses, sending signals and decisions, basically electromagnetic activities.

Now, as these activities are electrical and magnetic, you can imagine that the Central Nervous System is most vulnerable to microwave radiation.

Many studies have shown that microwave radiations have adverse reactions in the central nervous system, including sleep disorders and learning and memory impairments. While exposure to a large amount of radiation frequently can even lead to Brain Tumor.

Children’s central nervous system is even more vulnerable to these radiations than an adult as it is still growing and not thoroughly developed.

Does a Microwave Oven Pose a Cancer Threat?

As we discussed earlier, Microwave radiation could heat the body tissues the same way it heats food because human tissues absorb such radiation directly.

Therefore, exposure to high levels of microwave radiation from the microwave oven can cause painful burns. This harm can be due to a person’s carelessness, like if you have heated some food items inside and then you casually open the microwave door after you have just finished, so what do you think will happen.

The high concentration of radiation will cause painful burns. Therefore, you have to wait until the heat inside settles down.

Moreover, microwaves are monitored under the FDA, which is responsible for taking care of microwaves manufacturing in a way that is not harmful to human health.

Microwave ovens use microwaves radiation to heat food but not to make it radioactive. Microwaves are not known for causing cancer. Microwaves only heat food by causing water molecules to vibrate, and as a result, food is heated.

This act is different from the absorption of heat energy by food by conventional means.