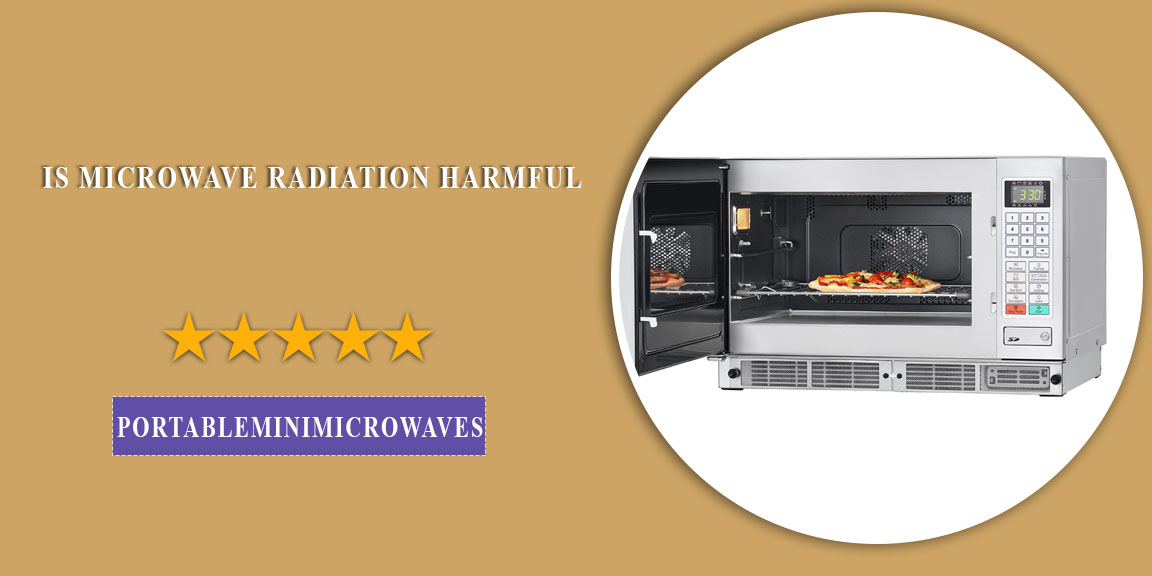 This one is a very commonly asked question by people worldwide, the reason being the excessive usage of a microwave in households.

Well, microwaves are manufactured under the observation of the FDA, which is the regulatory authority to ensure the safety performance standards of a microwave for public safety.

What is Microwave Radiation?

Microwaves are high-frequency radio waves, and like other visible radiations, it is a members of the electromagnetic spectrum. They are waves of electrical and magnetic energy moving together without a medium.

Microwaves are used for the detection of speeding cars and to send a communication through television or telephone. In addition, industries use microwaves to dry plywood, raise bread, and cook potato chips. But the most common commercial usage of microwave energy is in a microwave oven.

How Does Microwave Radiation From a Microwave Oven Harm a Person?

Most microwave oven injuries result from heat-related burns from overheated food items, exploding liquids, or hot pots. The damage reported due to radiation injury is very rarely caused due to unusual circumstances.

But again FDA is there to supervise the microwave oven manufacturers in the prevention of such potential harm.

Does the Microwave Cause Cancer?

Sachin Subash Marda, Consultant Surgical Oncologist, Yashoda Hospital, Somajiguda, said that “Though, there is still no scientific evidence that microwave ovens can cause cancer yet a word of caution always says anything in excess is harmful.”

Is Microwave Radiation Harmful to Food?

According to the American Cancer Society, microwaves do not use gamma or x-rays; therefore, they do not need radioactive food. All the radiation is absorbed by the water particles inside the food items to heat the food.

Microwaves cook food without altering its chemical nature. Under the warming of microwaves in an oven, the food is free from the effects of cancer. Microwave ovens function at a frequency that is not harmful, unlike other higher radiating radiofrequency.

Heating liquid food items inside a microwave are slightly dangerous because if the liquid is overheated and someone immediately removes it, then while doing so, the heat which is trapped inside will be suddenly released and cause bubbling and eventually make the liquid splash on the person and cause severe burns as steam has more heat capacity than water.

I accept that people have got injured due to microwave oven radiation. Still, most of them are due to very long exposure to highly concentrated radiation or direct contact with hot or steamed food.

Therefore, it is suggested to keep the container half-filled with liquid while heating inside a microwave and let it cool down before taking it out. And keep yourself away from the highly concentrated radiation.

Myths About the Microwave Ovens:

People say that microwaves make food radioactive and cause cancer. Well, we have already discussed that above in detail that it does not cause any such thing. The manufacturing of microwaves is under the supervision of the FDA, which is a particular monitoring agency that is there to make sure that microwave ovens do not cause harm to innocent souls.

Another myth circulates that microwaves kill all the food’s nutrients and change the structural and chemical composition of food altogether. But again, this is also not true because no microwave causes alteration in food structure and design. Instead, its purpose is to heat the food.

Microwaves heat food and severely damage the DNA, which is another speculation among people who do not have enough knowledge of microwave technologies.

The microwave oven’s walls release radioactive waves even when it is not in use is yet another myth that has caused considerable confusion in people’s minds. But you must know that no such thing happens. When a microwave is switched off, it is not radioactive; hence it cannot emit any radioactive waves.

There is a high probability that the leaking radiations from microwave ovens interfere with certain electronic cardiac pacemakers, which is alarming.

While the FDA has not taken specific measures to carry warnings for people regarding pacemakers, this problem is resolved to a more significant extent today.

Because today’s pacemakers are designed to shield and protect against such electric to magnetic radiations and electrical interferences. However, people should still consult their physicians if they have concerns about safety measures.

People say that microwave-cooked food weakens the bones. It is true in cases where food is introduced to highly concentrated microwaves, which is not the case with domestic microwaves. Hence, you need not worry about this food weakening the bones.

If you suspect that there is some radiation safety problem with your microwave, then without any further ado, contact your microwave’s manufacturer.

Your manufacturers are bound to comply with the standards set by FDA, so if there is any defect in the oven, they are to inform FDA. Not only that, you can directly report your problem to the FDA as well.